For Immediate Release from American Alliance for Hardwood Plywood 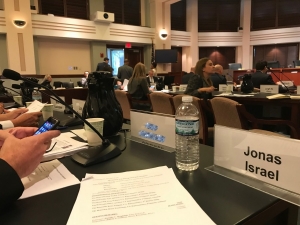 (AAHP) expressed confidence at the closing of a final hearing of the International Trade Commission (ITC) on potential antidumping and countervailing duties on imports of Chinese hardwood plywood.  The AAHP joined several industry stakeholders that testified before the ITC and presented strong evidence that imports of hardwood plywood products from China are not having a negative impact on the domestic hardwood plywood industry.   The AAHP’s previous opposition to an identical case in 2012 resulted in a unanimous vote by the U.S. International Trade Commission (“ITC”) to terminate the case. That win was later upheld  on appeal by a federal judge.

“As we’ve made clear time and again, domestic and Chinese plywood both play a vital complementary role for American cabinet manufacturers and other end users of this important raw material,” said AAHP Chairman Greg Simon.  “The ITC has ruled in our favor before and we feel confident that the facts continue to speak volumes. We trust in the deliberative approach of the ITC and that plywood from the United States, China and other countries can continue trade in a fair manner as they always have.”

The proposed duties of more than 225 percent would be devastating to the hundreds of thousands of American jobs that rely on hardwood plywood from both the U.S. and China, including U.S. Kitchen Cabinet, Furniture, Laminators, RV manufacturers and other vital American manufacturers, located in states like Indiana, Wisconsin, Ohio, Pennsylvania, Michigan and Virginia. A joint letter from International Wood Products Association (IWPA), National Association of Homebuilders (NAHB), and the Recreation Vehicle Industry Association (RVIA) was sent to ITC commissioners in advance of yesterday’s hearing strongly urging them to vote negative in the AD/CVD case.

“Our associations collectively represent hundreds of thousands of American jobs including manufacturing jobs that rely on access to both domestic and global raw materials to remain competitive,” the joint letter stated.  “One such product is hardwood plywood, where imported plywood has historically played a complementary role in the market alongside domestic hardwood plywood.   We are concerned that if this case moves forward to final antidumping and countervailing duties there will be unintended negative consequences on our industries, our members and their employees that collectively far outnumber those of petitioners – both in terms of employment and contribution to the economy. We urge the Commission to consider the important differences between domestic and Chinese plywood and make a negative final determination just as it did in 2013.”

“The only thing that has changed since 2012 is that our Alliance has even more support today.  Every day we are contacted by more cabinet makers, laminators, furniture manufacturers and retailers who agree that Chinese and domestic hardwood plywood is fundamentally and physically different.  The petitioners continue to deny this fact to the ITC, while at the same time their salesmen are in the field, actively touting the fundamental product differences.  We exposed the truth the ITC hearing and are confident that we will prevail again,” stated Mr. Simon.

The American Alliance for Hardwood Plywood is an organization of American importers, distributors and manufacturers of hardwood plywood, along with other U.S. companies, collectively representing more than 100,000 American jobs that depend on the availability of global resources.